Navigating Parental Leave and “Returnity” in a Startup Environment

A Conversation with Karat's Sarah Scherzer

Five years ago, Sarah Scherzer saw a job posting on her neighborhood's mom-and-dad site and applied. Now she's Director of Customer Experience at Karat, where her role as a mother has always been a part of her story.

Listed between postings for car seats for sale and lost scarves, the post Sarah found was advertising a part-time job at a startup called Karat. She'd worked in the theater industry previously, but her position had ended, and she needed a part-time job that would allow her son to keep his much-coveted three-day-a-week Seattle daycare spot. The timing was perfect.

There were four people at the company when she started interviewing. Though she hadn't worked in tech or with engineers before, Sarah explains that her "operationally-minded" approach and her skills as a people person, both honed during her theater job in artist relations, applied well to Karat's needs. The company's mission—to make hiring and interviewing better and fairer—appealed to her. She was hired as employee number five.

Scaling with a startup—and a family

Sarah's 20-hour job started as just that; she worked only on the days her son was in daycare.

But as the company grew, Sarah's responsibilities did, too. The need to operationalize things was pivotal, so Sarah quickly ramped up to effectively scale key parts of the business while the founders focused on Series A funding. "20 hours turned into 40…. I was made full-time pretty quickly," says Sarah.

Her path to leading a team happened naturally. "Growing into my role was fairly organic. I just kept learning more and more and more and figuring things out as I went," says Sarah. "In a startup environment, everyone's wearing so many hats. I was used to doing that in the theater world, too, where everyone kind of does everything, and I think that really benefited me in the workplace. I felt like I wasn't stifled and could try something, fail, and pick it up and try again."

She was excited by the opportunity to grow her skills and her career. "My direct manager is Jeff Spector, one of the founders at Karat, and he has always made sure I'm constantly growing and developing," says Sarah.

But she also wanted to be around for her children. "I was upfront from the get-go that while I want to do this kind of work, I needed to be absolutely sure that my kid is being well taken care of."

Sarah's commitment to her family was understood by both Karat founders, who have children and families of their own. From the beginning of her time at Karat, it was clear to Sarah that family values weren't just a talking point on the company website. "For instance, our other co-founder, Mohit Bhende, intentionally puts a 'do not disturb' block on his calendar from 8 to 9 a.m., because that's when he reads with his child. They're very intentional about how they prioritize their family."

Sarah knew Karat would be a good long-term opportunity for her because of the flexibility when it came to family and parenting — even when she didn't quite know how that flexibility would play out. (And that same flexibility has been a godsend now as she's had to adjust to working from home AND parenting AND schooling two young children in the midst of COVID-19). 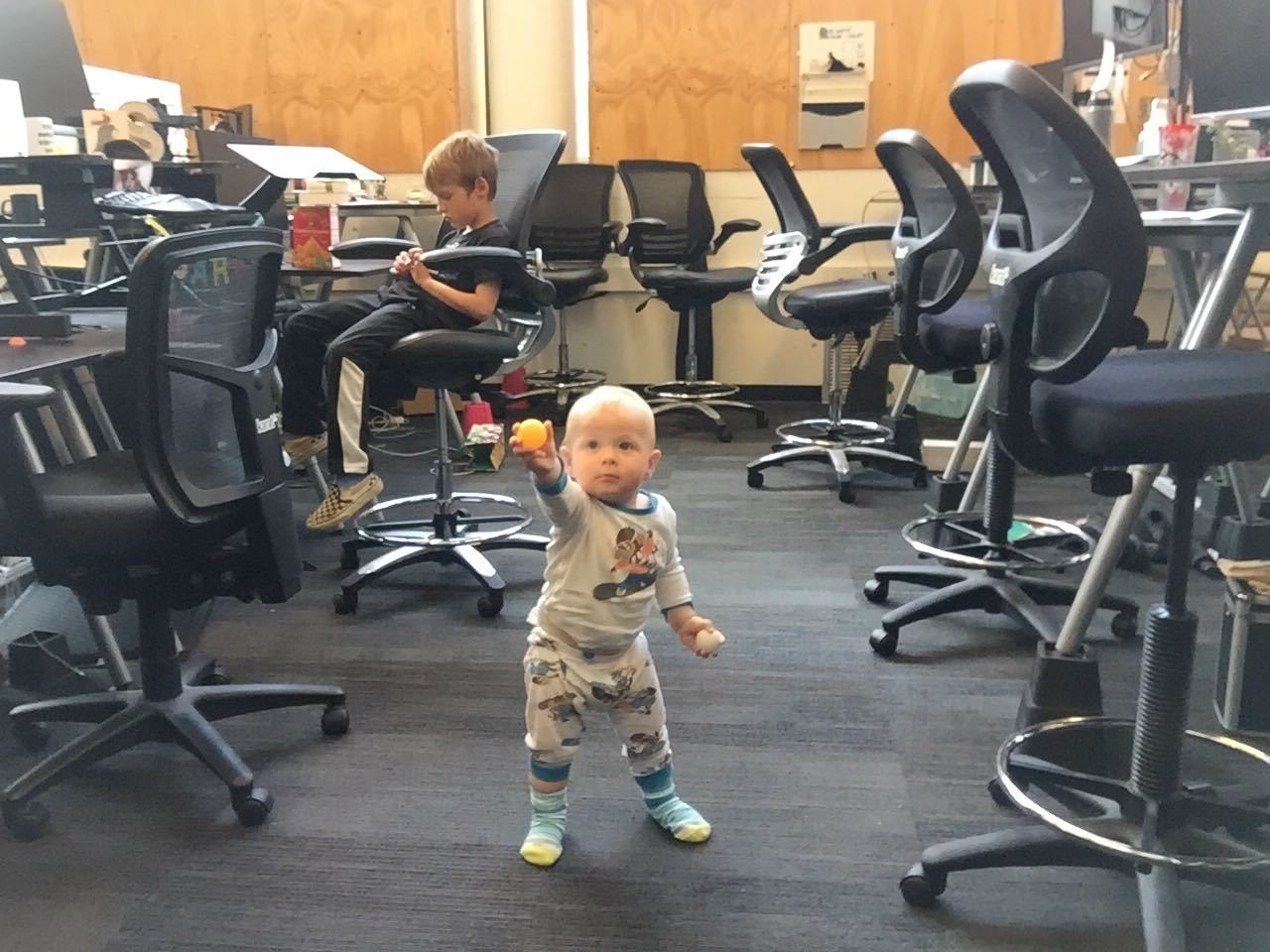 When Sarah became pregnant with her second child, Karat hadn't yet finalized a formal leave policy — they hadn't needed one before. So she and the co-founders created the policy together, and she gave feedback as to how it worked as she went through it.

They settled on 12 weeks of 100% paid leave that can be taken at any time over the first six months. That allows some parents to come back to work part-time earlier on, if they like, or to take the whole chunk of time off at once.

Sarah and her boss talked through all the logistical aspects of her transition, too. How in-touch did she want to be with the team? Would she get text messages? Slack access? Sarah decided she didn't want any of that—she wanted to be fully present with her growing family.

When it was time for her to return to work, her team helped ease the transition — they'd set up a spreadsheet with high-level weekly summaries of what she missed so that when she came back, she was able to get up to speed quickly.

And now, whenever someone goes on leave, a similar meeting happens, wherein the person leaving is asked what they need to succeed both during leave and during their transition back.

In Sarah's case, she took some time off, then came back three days a week and ramped back up to full-time over a few months. "That level of flexibility let me guard against not knowing what could happen. What if I had to have a c-section or if my son had to spend time in the NICU? And of course, there's always daycare snafoos, napping issues, and sickness," she says of the benefits of the flex policy.

"When it was time, I was definitely ready to come back again. I needed to just put on shoes and talk to people, talk to adults. I needed that for my sanity," says Sarah, laughing, of her transition back. Though she was excited to be in the workplace, she got back and realized that her role would need to change a little.

She was definitely still needed; her team had even come up with a list of things they were struggling with that they needed her to unblock. But they'd also taken on a lot of her responsibilities while she was gone—which Sarah saw as a success, not as a threat to her job stability. "It wasn't that I came back and was like, 'Oh no, what do I do?' There's always something to do. But a lot of the things I had been doing, they were covering, and it had been pretty successful," she says. Her duties evolved, and now she realizes that "a role can change in a really positive way."

Advice to parents and startups navigating maternity leave and "returnity"

Thanks to her own experiences taking maternity leave, and her conversations with other Karat employees who've now done the same, she's got some good advice for working parents at all stages of the leave process, especially those at startups.

Before going on leave:

How to handle going back to work after maternity leave:

To learn more about Karat, check out their open positions or reach out to Sarah in the comments!