Equity vs. Equality: A DEIB Expert Explains the Difference

The difference between equity vs. equality is a key concept in DEIB efforts. We tend to use these terms interchangeably in everyday speech, and it’s true that they are close synonyms, both essentially referring to fairness. But the distinction between equity vs. equality is, in reality, a fundamental one. It’s a distinction that underpins all social justice work, including our efforts towards building more inclusive workplaces and my own work as a Global DEIB Strategist & Trainer.

Equity is part of a larger process to create a more fair and just society. Today, I’ll define both equity and equality, describe how they intersect and where they differ, and share some real-world examples. I hope to clearly explain how the equity vs. equality DEIB concept can be applied in the workplace as a better business practice.

So, what is equity vs. equality? Let’s start by defining some important terms. I find that it can be helpful to define opposite terms as well, beginning with inequality.

There are two different ways to look at inequality:

In the United States, many forms of inequality, like income inequality, are steadily increasing today. Between 1980 and 2016, U.S. income inequality increased by about 20%, according to Pew Research Center. Pew found that the number of American adults living in middle-income households dropped from 61% in 1971 to 51% in 2019, while the number of upper-income and lower-income households grew.

Similarly, for the past 30 years in Europe, markers of inequality have been increasing. Since 1993, 19 countries in the E.U. have seen declines in educational equality, 16 have seen declines in health equality, and 18 have seen a significant decline in socioeconomic equality. Meanwhile, across Latin America and the Caribbean, economic elites have blocked fiscal reforms that would upend long-standing inequality and create better social protections, according to a 2021 report from the United Nations. And in India, the share of wealth possessed by the bottom 50% of earners has been cut in half since 1961, while the wealth of the top 1% has grown 180%.

Inequality is a global, worsening problem, with marginalized groups absorbing the worst of its impacts across the world.

The work of equality is to call out exclusions that have existed for historically marginalized people and communities. People who support policies of equality may say they also support “color-blind” policies — that is, treating people as equally as possible regardless of race or ethnicity.

What’s wrong with that? These policies tend to support those who already have power and opportunity in society. Recruitment research, for example, shows us that people tend to recruit their own likeness. Whether subconsciously or not, White cisgender people hire White cisgender people. The same goes for university admissions and other merit-based applications, limiting the way these “equal opportunities” exist in practice.

Why is that? Picture a White cisgender male CEO. He is ultimately in charge of how his company recruits, hires, promotes, and retains workers. His policies reward behaviors he deems valuable. He values leadership, being outspoken, making unilateral decisions, risk-taking, and professionalism (considered code for White favoritism). All these values are behaviors he has been rewarded for in his lifetime as a White cisgender male in society.

Those from marginalized communities are punished for these behaviors. I’ve seen men praised for taking charge while women are admonished for “being aggressive.” There are also cultural reasons for people of color and/or people from more collectivist cultures not to demonstrate some of these behaviors — meaning, the same people always move up in the company (and in society). Basically, organizations stay White. It's a vicious cycle. In this way, an emphasis on equity vs. equality can be more productive.

Equity occurs when each person is allocated resources and opportunities based on their circumstances to reach an equal outcome. While disparities have long existed, acknowledgement of different lived experiences is still weak.

With equity, we try to understand the real disparities that a person or group might experience. Then, we attempt to tailor resources for them, creating a variety of paths to equal outcomes that recognize these disparities and what different groups’ real, lived needs are.

This is not as intuitive as the one-size-fits-all equality policies mentioned above, and sometimes people resist the idea of equity. Affirmative action or race-conscious admission policy in U.S. universities is an equity-based policy that is under constant scrutiny. In California, affirmative action is now banned, exacerbating socioeconomic inequalities in that state.

An equity vs. equality image I love is the following graphic from the Robert Wood Johnson Foundation. It manages to neatly illustrate one key takeaway: Equity allocates resources in a way that specifically addresses individuals’ needs and circumstances. 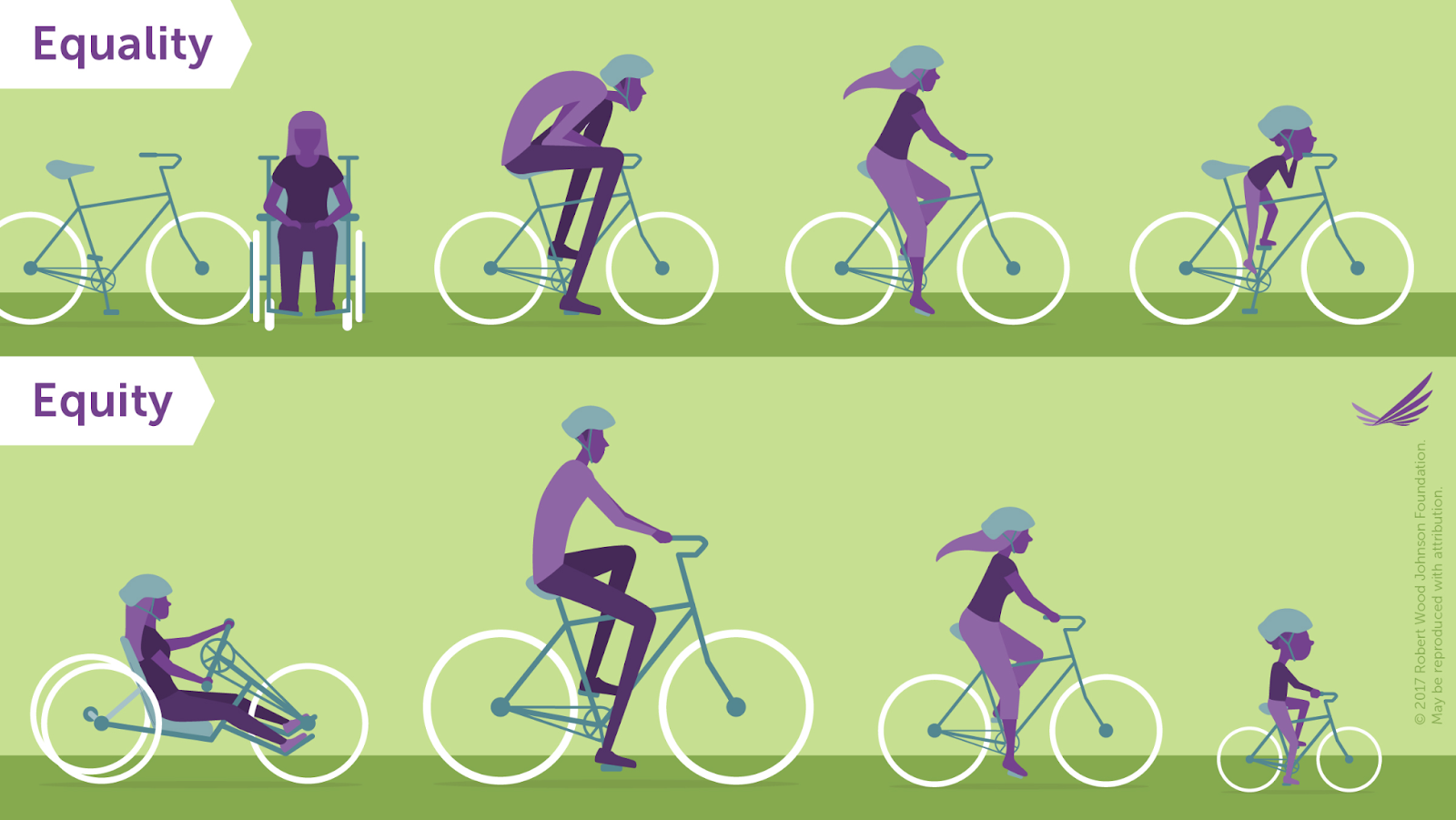 Another equity vs. equality image I use is from the illustrator Tony Ruth. Here, the concept goes beyond equity to highlight systemic problems. In the image, the tree is titled to one side, and there is an imbalance in fruit growth. 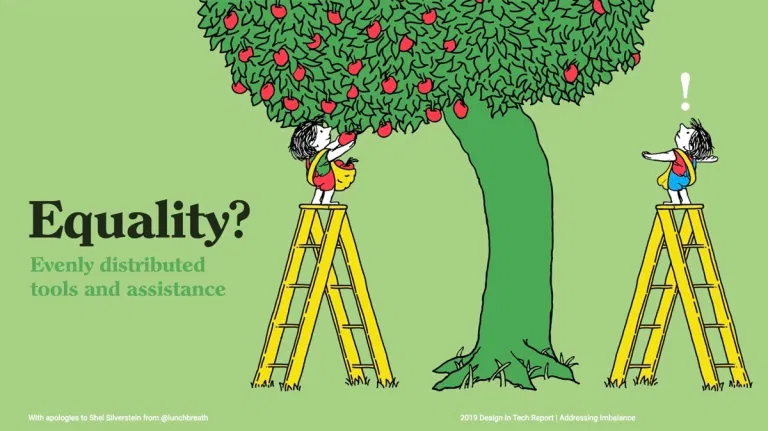 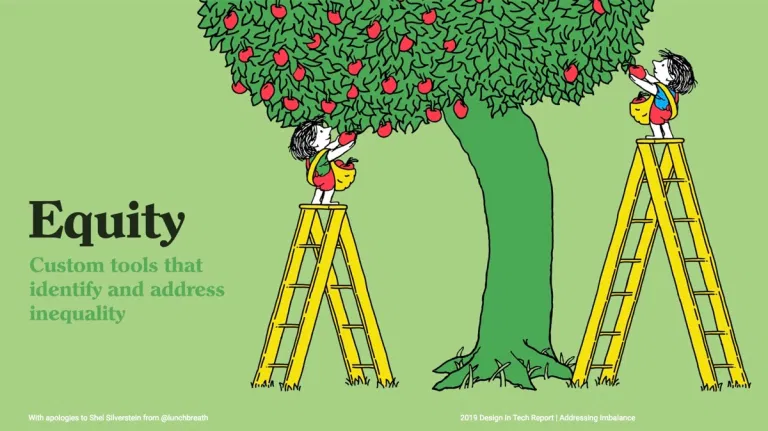 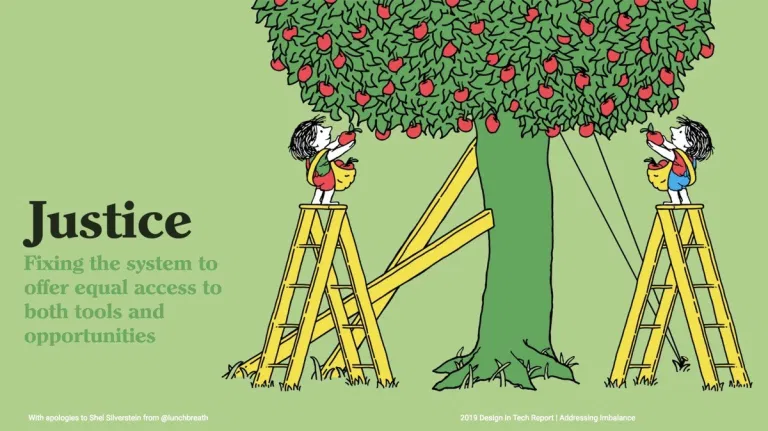 Justice, in other words, occurs when people have the resources they need and systemic inequalities are removed.

Many of us are familiar with the concept of equal pay for equal work. This is pay equality. It demands transparency and that people with the same job position make the same salary regardless of background or gender.

In late 2022, the U.S. Soccer Federation announced they would pay the U.S. Women’s National Team an amount equal to the money awarded to the men’s team for the FIFA World Cup in Qatar. Though the USWNT have won more international tournaments than the men, they faced decades of discrimination and shortages in resources, support, and media coverage. They will also be paid $22 million in back pay to retroactively address equity. They are a more valuable sports team to the country because they perform relatively better, even though they can’t attract as much money or viewership. Pay equity also acknowledges that there are systemic disparities faced by people on the same team, and attempts to correct it.

As is true of most colonized nations, extreme health inequities in Australia become clear when comparing the health outcomes and life expectancies of Aboriginal and Torres Strait Islander peoples and non-Indigenous Australians. In the past, Australia’s government has responded to these disparities with paternalistic, culturally insensitive policies that went against the wishes of many First Peoples in Australia and made inequities worse.

Then, in 2019, a formal agreement for a “Closing the Gap” program was reached between Australia’s state and territory governments and a coalition of more than 50 Aboriginal and Torres Strait Islander organizations. With a goal of achieving health equity for Australia’s First Peoples by 2030, the program recognizes Indigenous people’s authority over what their own communities need and is putting resources into closing gaps like physical and financial barriers to health services in rural areas and the need for culturally appropriate healthcare.

Close your gender pay gap or risk being outed by my favorite Twitter bot: @PayGapApp exposes companies with hypocritical DEIB messaging. Each time a company posts about equity but has a gender pay gap that is public knowledge, this bot calls them out. There are hundreds of examples.

How to Make Your Workplace More Equitable

We need intentional and active DEIB practices to make workplaces more equitable. Here are a few crucial steps in your journey towards equity in the workplace.

What does DEIB look like for your company? Try finishing these sentences:

Examples of DEIB goals include:

Once you’ve set goals, you need specific indicators that show progress. From your current demographics to your goal demographics, what is the percentage of change needed to achieve equity? As we like to say at PowerToFly, what gets measured gets managed, and tying your lofty DEIB goals to concrete, measurable, and shareable numerical outcomes is essential. Employee feedback, too, is the most critical measure of your progress.

DEIB training gives us the opportunity to learn about other people and confront our own biases. Through different channels, address the following areas or bring in a consultant who can:

Equitable hiring and recruitment takes everything I mentioned above and infuses it into an intentional, impactful approach to growing diverse teams. This applies to how we advertise jobs and select and screen candidates. Partnering with a DEIB training expert can be extremely helpful when teaching teams to recognize our biases towards people’s background, circumstances, look, and behavior.

Equity in the Workplace

Understanding equity vs. equality is something I think about on a daily basis. I know there are plenty of professionals out there, like myself, who want to make their company a better place to work for all. Understanding equity helps us meet the needs of our people and provide the right resources so that our teams can be efficient and productive. In doing this, we acknowledge that systemic disadvantages are real, and we can work to actively dismantle them.

AboutPrivacy PolicyContactTerms of Use
© Rebelmouse 2020