"Don’t accept ‘no,’ women who want careers in cybersecurity can get one, says Juniper Networks exec"

Below is an article originally written by Howard Solomon, a Freelance Writer for IT World Canada, and published on March 11, 2020. This article is about PowerToFly Partner Juniper Networks. Go to Juniper Networks' page on PowerToFly to see their open positions and learn more.

Samantha Madrid's path to becoming vice-president of Juniper Networks' security business began in high school when she was told, 'no'.

It's not uncommon for women to be told no, particularly those trying to build a career in IT and cybersecurity. 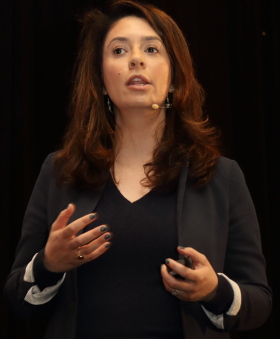 She told several hundred at the Canadian Women In Cybersecurity conference Tuesday in Toronto that over the years, "there were a lot of 'nos' that I learned to navigate."

But this particular one galled her. It came from her high school guidance counsellor.

Coming from a poor home in the U.S. and raised by a single mother, Madrid had told the advisor she planned to go to college. Among her dreams were becoming a business executive, a trial lawyer or a lobbyist arguing for people who didn't have a voice.

"You may want to take a different path," the counsellor responded. "Not everybody is meant for college."

Madrid refused to accept that.

"I remember thinking I wasn't a bad student, but I was a decent student. I was varsity on the debate team, I was co-captain of the swim team. I was very competitive.

"I was shell-shocked. I was devastated. I went home and cried all night long.

"And then I got angry. And this was the point that defined who I am. Because I got so angry at her I said, 'I'm going to show her that she is wrong.'"

These kinds of experiences aren't unusual for women, or some men, Madrid said. "You can either let it define you or let it motivate you."

It's easier to be a woman in cybersecurity today than it was 30 or 40 years ago, the conference heard. The profession and related roles, like risk managers — are still overwhelmingly male. Women still account for only 10 per cent of those in cybersecurity jobs in Canada.

But there are some bright spots. One speaker noted a recent global report last year by the International Information System Security Certification Consortium, (ISC)², a non-profit which specializes in training and certifications for cybersecurity professionals, found women in cybersecurity are younger, boast more education and are moving into senior leadership roles at higher rates than men. And while they are paid less than men, the gap is less in younger age groups and for women in senior positions.

Millenial-aged women making more than US$100,000 have overtaken their male counterparts.

The conference featured a number of Canadian women who hold titles like vice-president or team leader in IT or risk management. Many recalled being the only woman in a networking class or on their first IT team. Most said their managers were supportive.

But they also talked about the need for women in IT to find a mentor, be more assertive in their careers, to look for opportunities for promotion. To say yes.

Madrid's message was that obstacles — you need a certification, you can't do that job — can be part of a career path.

She offered these five tips:

By the way, after graduating from college Madrid worked for a U.S. state senator and didn't like it. Along the way she picked up some aptitude for computers, so when a friend told her Cisco Systems was hiring, she read books about networking so was prepared and applied. And once she was hired took some certification courses.

"You have to believe in yourself. It doesn't matter the obstacle … At the end of the day, you are your only cheerleader and you are the only person who will make it or break it."

The conference was organized by SiberX, a Toronto-based training and skills development platform.